Elizabeth Woolridge Grant (born June 21, 1985), otherwise known by her stage name, Lana Del Rey, is an American singer, songwriter, and model. Besides being an award-winning singer, she is one of Marina Diamandis' closest friends.

Del Rey grew up in rural Lake Placid, New York, and was raised Roman Catholic. She attended a Catholic elementary school and for one year, a high school where her mother taught.  She began singing in her church choir when she was a child, where she was the cantor. At age fifteen, she was sent to Kent School by her parents to deal with her rampant alcohol abuse; her uncle, an admissions officer at the school, secured her financial aid to attend.

Before becoming a singer, Del Rey wanted to be a poet. As a child, her father wrote country songs for personal enjoyment, while her mother was interested in singing; the former introduced her to The Beach Boys, while the latter was a fan of Carly Simon.

After graduating, Del Rey was accepted to the State University of New York at Geneseo, but she decided not to attend and instead spent a year living on Long Island with her aunt and uncle while working as a waitress. During this time, Del Rey's uncle taught her how to play guitar, and she "realized [that she] could probably write a million songs with those six chords". Shortly after, she began writing songs and performing in nightclubs around the city under various names such as "Sparkle Jump Rope Queen" and "Lizzy Grant and the Phenomena". "I was always singing, but didn't plan on pursuing it seriously", Del Rey said. "When I got to New York City when I was eighteen, I started playing in clubs in Brooklyn—I have good friends and devoted fans on the underground scene, but we were playing for each other at that point—and that was it".

The following fall, she enrolled at Fordham University where she majored in philosophy. Del Rey said she chose to study the subject because it "bridged the gap between God and science... I was interested in God and how technology could bring us closer to finding out where we came from and why". According to Del Rey, she had trouble making friends in boarding school and college, and said, "that was when my musical experience began. I kind of found people for myself". She lived in The Bronx and later moved to New Jersey while in college, and volunteered at homeless youth and drug and alcohol outreach programs, as well as helping paint and rebuild houses on an Indian reservation in the western United States. After college, she moved to Brooklyn, where she resided for another four years.

Little is known about the beginnings of Lana's and Marina's friendship.

In July 2011, Marina wrote on Twitter: "Could not handle Lana Del Rey's beauty tonight. She is 1 of the true beauty queens. Listen to her music. Love u, gf."[1]. Lana wrote to her later: "Love You- Didn't wanna say Goodbye", to which Marina replied: "I never wanna say g'bye to the Princess of Oi"[2]. More than a month later, in September 2011, Lana wrote to Marina: "How's My Girl?".

In September 2012, Marina quoted Lana Del Rey's words from an interview to BBC Radio 1[3], "I listen to a little [Marina's discography], She has a song called 'Teen Idle' that I really like", on Twitter[4].

In March 2015, Marina was asked thrice about Lana Del Rey.

In an interview to The Independent, Marina said: “At the starting everyone was comparing me to Lana [...] You will always be compared in that fashion when you are a girl. People zero in on the fashion, on stuff like ‘well, she’s a got a curl and Lana Del Rey has a curl... they must be the same thing’. I adore her, think she’s tremendously talented. However, I’m glad the comparison has gone away.”[5]

In an interview to I am hype, when asked about the possibility of a collaboration with Britney Spears or Lana Del Rey, she said: "With Britney Spears? That would be weird. Lana, I love Lana," later answering the question if Lana loves her too: "I think so. One thing is to love an artist and another thing is working with it. So it wouldn’t probably work, for example between me and Britney. But you never know, I love her so I will always be interested to do so. [When it comes to Lana] I do not know, I mean I haven’t seen her for four years. It really depends on the song, if you stay with the person, there are many other factors you know... So we’ll see, you never know. Never say never."[6]

In an interview to the Aquarian, an interviewer said to her: "Friends of mine always talk about you and Lana Del Rey being sort of the dream lineup," to which she replied: "You and half of the internet. That’s all that I see in my Twitter mentions. [...] I love her. I think we share a similar aesthetic in a way, my second album and her first one. I think we both obsessed over an icon, but yeah, I think she’s lovely."[7]

Lana thanked in the booklet of her album Lust for Life (2017), writing "Thank you Marina - for your friendship and your art". Marina did the same two years later.

In February 2017, Marina replied to a fan saying to her on Instagram that she should listen to Lana's song "Love", to which she replied "I have and I am. It's beautiful. Love her". Lana replied: "Angel".

In May 2017, Marina posted a video on Instagram with her and Lana, the first actual media that can be found online, in which they were seen together; Marina said to fans, being hugged by Lana: "I know you've been waiting for this for a long time, I have a surprise! We haven't seen each other for five years, and we know you're so supportive of our friendship, so we just wanted to send you some love." Lana posted later a picture of their friendship bracelets they bought at the Pygmy Hippo Shoppe in Los Angeles, captioned "I can't tell you how happy it made me to see this Angel. I don't even have the right words to explain how good it was to see her!" (Marina was seen wearing it when singing Disconnect live in June 2017). Among many videos/photos posted together, Lana captioned one "SISTERS".

In July 2017, Marina posted on Instagram a video from Lana's concert she attended.

The same month, Lana was asked on who she’d love to work with in an interview with Annie Mac. She said: “I love Rae Stremmurd, I love Swae (Lee), from that group. I really love Lil Yachty, just as people, you know, they make me smile and I just think they’re such amazing artists. I love Marina. I love Bat For Lashes, I love Natasha. Florence I really love.”[8]

Lana also spoke to Zane Lowe on Beats 1 Radio, where she said about Marina: “we always say we’ll do something but I don’t know what she’s gonna do with her music.”[9]

In October 2017, Lana was asked on her Instagram livestream about a collab with Marina, smiling and replying: "That's my girl".[10]

In December 2017, Marina posted on Instagram a photo of Lana with her cat at her house from summer. She also uploaded another pic taken together.

On February 26, 2018, Marina posted another pic with Lana captioned "Sis 👯‍♀️", and Lana posted a pic with Marina dining together out captioned "Babe 💕💕💕💕💕". The same day, Del Rey hosted a livestream on Instagram showing her working on her sixth studio album, Norman Fucking Rockwell, with Jack Antonoff. Shortly afterwards, Diamandis posted a picture of herself, Del Rey and Antonoff together sparking rumours that a collaboration between the musicians was in the works,[11]. However, Marina answered on her Instagram Q&A in November 2018 that a collab between the two is not in plans.

In July 2018, Marina interviewed Lana for L'Officiel USA, asking her: "To what extent do you think our personalities are shaped by the way we look?"[14].

In September 2018, Marina spent more time with Lana and her family. Lana's father wrote: “We just adopted the beautiful Marina ... to celebrate the girls bought me a gansta Golden peanut necklace”. The same month, she added a selfie on Twitter captioned "Soy la princesa" (a lyric from Del Rey's song, Ultraviolence), to which Lana replied "Ugh ily".

In December 2018, Diamandis was again asked about her collab with Del Rey, saying "I would love to, 'cause I think she’s one of the best artists of our generation and I love her as a person, but I think it’s just a timing thing"[15].

Marina thanked Lana in the booklet of LOVE + FEAR (2019), writing "Thank you Lana - for your inspiring views on life. I appreciate our friendship so much."

In February 2019, Lana posted on Instagram a fragment of Marina's music video for her first single from her 4th album, "Handmade Heaven", captioned "Marina❤️".

In March 2019, Lana posted yet another picture with Marina on her Instagram[16]. 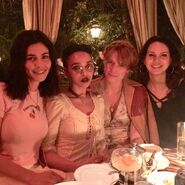 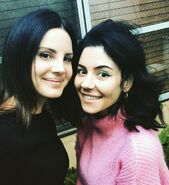 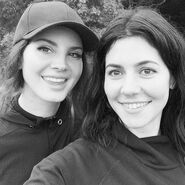 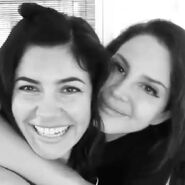 Add a photo to this gallery

Retrieved from "https://marinaandthediamonds.fandom.com/wiki/Lana_Del_Rey?oldid=24755"
Community content is available under CC-BY-SA unless otherwise noted.